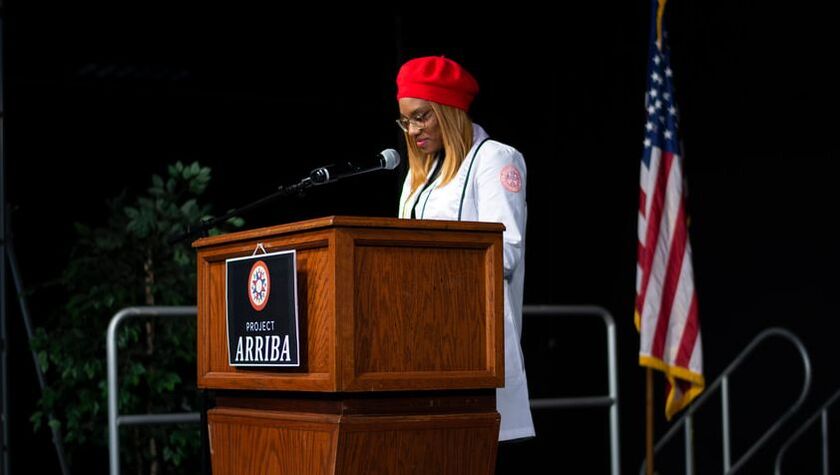 My name is Marion O’ Veal White and I was born in Cleveland, Ohio where I resided my entire life before relocating to El Paso, Tx. Prior to my matriculation to UTEP, I attended a trade school and community college. I also obtained a certification as a nursing assistant, with the goal of providing for my family while I attended community college.

Prior to deciding to relocate, I received an associate of science, and an associates of arts at my local community college. Though I was very proud of this accomplishment, I knew that I would be very limited in obtaining the things that I wanted in life. During this time, I worked full time, all the while child rearing and going to school.

There were many challenges along the path, which caused me to second guess my goal of becoming a nurse, but I was determined and therefore push forward. Some of those challenges included times when transportation was unavailable, babysitters absent, financial lack, and a litany of other deterrents to success; nevertheless, I persevered.

Once I arrived in El Paso, I had some of the same challenges that I experienced in Cleveland, but to a greater extent. The opportunity cost of attending school was great. I had to give up full time employment, relocate halfway across the country, and leave behind a familial support system. This was all done with inadequate finances, but I was rich in faith.

The first year my children and I walked everywhere and caught the bus when were able to, whether that was to the grocery store, daycare center, the public library or UTEP. I had family support back home; however, they were not able to contribute financially. Now imagine that you moved to a city that you had never been to before and you knew practically no one. Where does one start? Where does one go? What does one do?  I thank God for Project ARRIBA. Project ARRIBA came along at the right time in my life

Prior to learning about Project ARRIBA, I was informed by the financial aid office at UTEP, that I no longer qualified for Pell-grant, and that I was fast approaching the limit for federal student loans. This newfound information added additional stress to my already hectic life. At that point it seemed as though completing the nursing program was impossible. I refused to give up and quit, my children and I came so far, scarified so much for this to be the end of our story. I pressed forward in the face of uncertainty with prayers and my faith in Jesus who sustained me. The reoccurring thought that played in my mind was, “I cannot fail, if I fail, I fail my children.” “We are hundreds of miles away from home, we can’t turn back, the only direction is to go forward.”

I took the placement exam, passed it and was instructed to come into the office for an intake appointment. I was excited as this was an answer to one of my prayers. I remember vividly as I sat in my intake appointment with Ms. Estella and we discussed my situation of being a single mother, providing for my three children, working while in nursing school and the lack of finances. Ms. Estella looked at me and asked me how I am doing it, my finances did not cover my expenses, I was taking care of an entire household alone, and taking care of children. I told her it is by the grace of God that I am making it and that it has been very hard to sustain. She also informed me how tough it had been for previous participants to work and complete the nursing program. She asked me what my back up plan was concerning providing for my family. I told her that I didn’t have one, and that I had no choice but to work while completing the program. I really appreciated how genuine she was, the concern she showed and her level of honesty, but for me I did not have any other choice. I was living day by day by faith and grace alone.

Upon officially participating in Project ARRIBA’s program, the staff were beyond supportive. Mimi who was my case manager was always approachable, always available to talk when I needed, and always went above and beyond for all the participants including myself. When I was not able to make it into the office to drop off my attendance sheets, she would meet me at my clinical site, or a mutual location. She took time out of her own schedule to help accommodate me when I was facing difficulty. That’s just who she is and what she does. She truly has the heart to help others even when it is unfavorable for her. Mimi and I became close enough where she knew when things were going on with me even without me mentioning it.

A little over a week before graduation my children and I got into a car accident and Mimi just happened to call me. From the time I picked up the phone she knew something was wrong. I confided in her and told her everything that was going on and she was there to listen. She told me, “You have really been having a tough semester, let me know if there is anything I can do.” I was in tears at this point and I let her know in addition to everything that was going on I still had not been able to find enough finances to pay for the remainder of my tuition. Immediately she said, “send me over your information, I’ll see what I can do.” Less than three days later she called me to tell me an award was sent to UTEP for the remainder of my semester. This was another answered prayer

Throughout the entire semester I struggled to pay my rent, utilities and provide some of my children’s necessities. In addition to this, thoughts of how I was going to pay for my tuition, replayed in the recesses of my mind. As many of the students in this room know, nursing school is extremely difficult, but when adding my personal situation to the equation, completing school is nearly impossible. Through my faith, strength, determination, and the help of Project ARRIBA I pushed through and I am now a UTEP nursing student graduate

​Completing Nursing School is a momentous change for my family, myself, and the El Paso Community. For my family, I will now be physically present more and I will be able to better provide for them financially. For my children, I have set the foundation and showed them the power of hard work and determination. As for the El Paso community, they will receive a nurse who is humble, compassionate, and empathetic to hardship, which will allow me to advocate for them and provide care to those who are in need. As someone who has endure so much adversity, I am willing to help Project ARRIBA to achieve their goals of enriching the lives of others and making change in the community and society as a whole. Project ARRIBA is an answer to prayers. Project ARRIBA was a Godsend to my life and this community. Now that I have finish school I want to practice in the field and then return to school so that I can provide an even greater good for my society. I am truly grateful to Project ARRIBA and I feel a fiduciary responsibility to give back to the program that gave me so much in the way of financial, emotional, and professional support.